why you should wear a white poppy 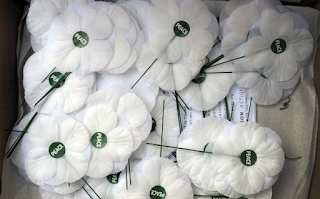 for remembrance day every year in britain hundreds of paper red poppies are sold in aid of the royal british legion and associated charities. instead of that, this year I urge you to consider spending just 50p* on a white poppy.

why? the money from the white poppies goes to support the peace pledge union, working in the memory of all those lives affected by war past, present and future; and to secure a more peaceful path looking forwards. the white poppy symbolises all those affected by war: the children left fatherless, the women abused and raped by british soldiers, the young and old men drafted to fight against their morals -- every person affected by war, no matter religion, race, gender, sexual orientation, ability or age.

the white poppy is a movement to de-glorify war. to stop militarisation in schools. to stop kids at london comic-con buying merch where offensive weaponry has been sold to overseas powers just months before**. to stop children as young as pre-school age thinking that the most honourable future they can provide is to die for peace. we should try living for peace instead.

*THE RECOMMENDED DONATION IS 50 PENCE
** THIS IS A REFERENCE TO THE MCM LONDON COMIC-CON WHICH IS HELD AT THE EXCEL CENTER, THE SAME PLACE AS THE BIENNIAL ARMS FAIR

john morris, a peace party representative is holding a peace poppy sale on north street, guildford town centre, all day outside the quaker meeting house on friday 9th of november, if you wish to purchase one, and you can also get them online.

Popular posts from this blog

September 16, 2018
my little brother, in a video my by older brother my experience  ever since i was a kid, my brothers have skated. my little brother was one and a half when he learned, he could hardly form sentences, but would come with our mum to pick us up from school on a tiny skateboard -- rolling speedy up the hill to the school buildings. i always wanted to do it, in some ways i have skated all my life: but for some reason i have always  been scared to do as much as i wanted. i think growing up as a girl with an older sister in the 2000s -- where gendered marketing was at it's peak -- i never recognised my uncomfortable sense of not feeling quite right in the "girly" norms; i was just a tomboy, fitting in. when i was around eleven or twelve penny boards were all around, so of course i had one (or, stole my brother's sweet yellow one periodically), but still it wasn't really what i wanted -- i was just conforming. i remember days where we could skate in the garden
Post a Comment
Read more

femininity and what it means to be a girl

July 05, 2018
femininity and what it means to be a girl  in december last year, sundial reached out to our friends to collate a spectrum of views on the topic of feminism.  we formatted our favourite answers here: the updated link is here   we also have a questionnaire about quakerism over here if that's you! thanks for reading, by issy x
Post a Comment
Read more

June 11, 2018
summer incoming!  to many sixteen year-olds across the country, this summer is going to be a big one. post-GCSEs we're getting ready to relax and have fun. however, sometimes summer holidays feels like a long time -- especially near the end. sundial has come up with some fun and easy stuff to do over the holidays if you're in a slump. 1) get out of the house grab a pal and explore your town or city! try the library, find a small coffee shop, where's the nearest park? or, even just go into your garden or road or yard.  it's so easy to get caught up inside on social media or whatnot (okay, mum) that we sometimes forget whats out there: take a breath, pick some grass, draw a picture, train your dog, sit on a bench and call your best friend!  one thing that i love is picnics! gather a group of any size -- two, three, seven -- and each bring a food item. fruit and bread's the best. just go to the bakery in sainsbury's or your local petrol station,
Post a Comment
Read more